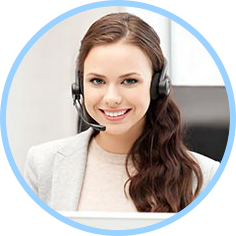 "Those who cannot remember the past are condemned to repeat it."
George Santayana, Philosopher, poet, 1863-1952

Notice that most words describing pants are in the plural for the two legs, which they cover.
Trousers may be the only garment ordered by God! 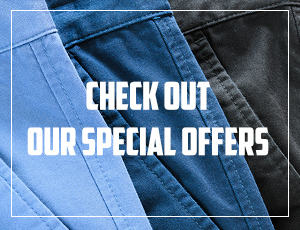 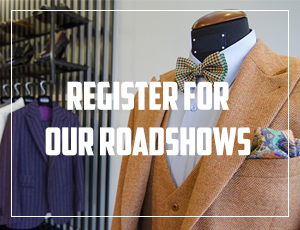 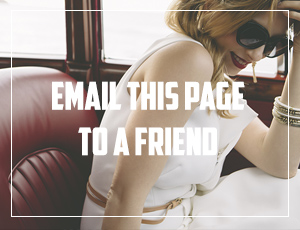 EXODUS 28:42 And thou shalt make them linen breeches to cover their nakedness; from the loins even unto the thighs they shall reach: 28:43 And they shall be upon Aaron, and upon his sons, when they come in unto the tabernacle of the congregation, or when they come near unto the altar to minister in the holy place; that they bear not iniquity, and die: it shall be a statute for ever unto him and his seed after him.

The Bible in Basic English:

EXODUS 28:42 And you are to make them linen trousers, covering their bodies from the middle to the knee;

Some versions lead us to think it was underwear not trousers! ??

The ancient Persians, Chinese, and Mongol hordes wore the pants in the world! They were calf-length trousers, perfect for waging war from atop a horse. Perhaps from their experience fighting the Persians the Greeks considered any form of legged garment as barbaric. The tribes of northern Europe introduced pants to the Romans who adopted them for cold weather wear for the Legions, but not acceptable when in Rome.

Charlemagne, (Charles the Great, 742 – 814) the first emperor of the Holy Roman Empire wore a form of trouser cross-gartered to the knees. Crusaders brought back the idea and translated it into tight hose of silk and velvet

About 1760 most men begin wearing breeches, a tight garment worn from the waist to the knee with stockings covering the rest of the leg. The word is from Middle English brech, from Old English brēc, plural of brōc, meaning leg covering; akin to Gaulish brāca, meaning hose, or trousers.

"Britches" was an informal word for breeches. Prior to this men were wearing various form of skirts and dresses (but that’s another story).

Pantaloons (where we get the word pants) first appeared as an English word in the 1600’s and came from the Italian comedy character Pantaleone who wore the first loose "clown pants". Eventually the character’s name came to mean the pants he wore. In England pants still refers only to underwear.

Pantaloons were made popular in 1812 by George Bryan "Beau" Brummell. He wore his with a foot strap (like modern ski pants) to keep the pants tight and avoid creases. Brummell, buddy to the future King George IV, developed a dress code that anyone, not just royalty, could follow. He dispensed fashion tips and stressed quality and cleanliness (both novel ideas for the time). Brummell met the future King George IV in 1795 and charmed his way into his life. This gave him enormous exposure to proliferate his sense of style on the public. His friendship was also his ruin when he got out of favor with the King.

"What a revoltin’ development this is" The French revolution of 1789 was also a revolt against breeches as being too upper class. The country peasant trouser look was in. The revolutionaries were known as "sans-culottes" (translated: breechless bums). The French revolution brought the idea of a classless way of dressing which included pantaloons and then followed by the first narrow trousers inspired by a looser garment worn by sailors.

Sailors had been wearing the looser fit work trousers since the 1580s since they allowed them to roll up the legs for wading ashore or climbing rigging. 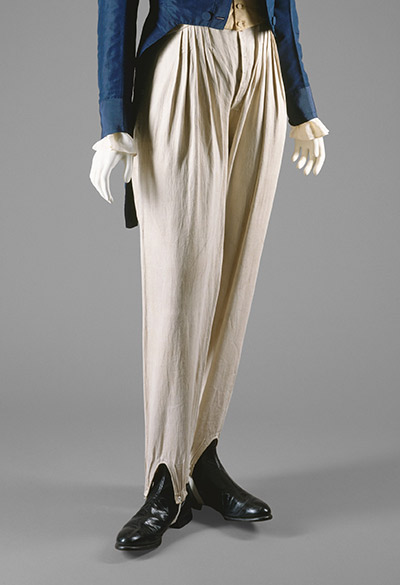 Trousers derived from the words trouses - drawers, trousses - trunk hose, and/or trousse – to cover, truss. They were looser than the tight pantaloons that were favored for daytime wear while pantaloons were more appropriate for evening attire. Trousers were worn over breeches when horseback riding to keep the more formal clothes clean.
Some trousers in the 1820s to mid-century had loops (called stirrup straps or Gaiter bottom trousers) at the bottom of the trousers to go under the shoes and hold the pants down. The earlier versions went under the stocking rather than the shoe.
A "stirrup" is a footrest attached to a saddle. The loops called "Stirrup straps" were a common part of cavalry uniforms. They were intended to prevent the pants from hiking up the leg while riding. Cavalry units were considered the elite troops of their time. Dress uniforms for officer ranks often included elements borrowed from those typical of cavalry units. Also known as gaiter bottoms, the finest were cut as one piece along with the rest of the trousers. Some were sewn on after the trousers had been made. The fashion lived on as military uniform for a little longer than the 1870s until it was adopted by ski bunnies in the 1960’s.

Creases down the center of trousers didn’t gain popularity with the average guy until after the mid 1930’s.
The unsubstantiated story (but fun) is that the Prince of Wales, the future King Edward VII (1901-1910), fell off his horse during a country ride in the mid 1880’s. He was carried into a nearby cottage to rest while his clothes were cleaned and dried. In an understandable nervous state the lady of the country cottage ironed the trousers with a sharp crease down the front. The King is pleased and Royalty once again takes credit for a fashion fundamental.
Whether that story is true or not, it has been historically noted that the Prince of Wales (future Edward VII) appeared at the 1886 Derby wearing a pair of gray trousers with sharply-ironed front creases.
English King George V (1910-1936) insisted in having his trousers creased on the side seams, like jeans today. This was a Royal Navy tradition. The younger Royals and commoners begin favoring the front creases, maybe as a youthful rebellion against the old style side creases!

Cuffs or "turn-ups" date to the 1860s when members of the Windsor cricket club began rolling up their trousers to protect them from mud and water. Consequently tennis players copied the look by rolling up their flannel trousers before hitting the courts.
English Royalty was seen in town wearing turn-ups and even to the Ascot races! British gentlemen began imitating the style, but the initial response was not positive.
There was pandemonium in the House of Parliament in 1893 when Viscount Lewisham appeared wearing cuffs on his trousers. Society disapproved of turn-ups, claiming that they collected dirt that would be brought indoors and that men had to take care to turn them down before entering a respectable indoor location.
The advantage of knee breeches worn in the 18th Century was that the hem was high enough off the ground that they were not likely to be soiled, and the stockings worn with knee breeches were much easier to launder.
But by 1880 tailors were putting cuffs onto trousers, and by the early 20th Century, cuffs had become an accepted variation on trouser bottoms.

Formal dress trousers are never cuffed, because there could not possibly be any chance of mud at a formal occasion!

The FLY is the opening at the front of your pants to make it easier to get on and off. Before flies on pants, various types of flaps were used. A variation of the modern fly, with buttons, was accepted by the French military in 1842. The use of the term "Fly" as a front opening for trousers probably came from the name of the flap of a tent. (Middle English flien, from Old English fl ogan.)

In the 1860’s knee pants were popular for sports such as hunting and golf. They took the form of loose breeches such as "plus fours" which came four inches below the knee. We still see this style on the golf course.

They continued popularity through the 1920s and 30s when they became known as Knickerbockers after a common last name of the New York Dutch who wore traditional knee pants.

Oscar Wilde tried to reintroduce breeches in 1890, but the gentlemen of the day were rational in their rejection. The state of mind held steady until 1925 when a hot summer was the excuse for Oxford Bags. The measurement of these loose pants at the leg bottom reached 40 inches!! Invented and embraced by English Oxford University students, Bags were inspired by the loose trousers that oarsmen slipped on over their shorts. The extreme fashion didn’t last long, but reappeared as the pants to wear with the Zoot Suit in 1938.

Although not as extreme, another attempt at wide bottoms came when Pierre Cardin popularized bell-bottoms in the 60’s as a reaction to the new narrow shoulder suits. Jeans were also effected and affected during that time.

Another word, which is interchangeable with pants and trousers, is slacks, which was coined by the Haggar Corporation in the 1940s as a promotion for their casual pants, to be worn during your "slack" time between work and sports. Ed Haggar and Morris Hite are credited with coming up with the word.

Short pants were also an English military invention to keep cool defending the far flung Empire. Bermuda shorts were worn down to the knee and are named after the British island.